In the course of my time in Uganda I have been keeping a journal. At one point in February, I wrote down one particular paragraph which seems appropriate for this blog entry. It is slightly naïve, but surprisingly less so than most things I wrote in February:

I feel awareness in the first world is terribly important. I feel throwing money at a problem will never solve it. I feel most people cannot fathom what it's like here. I think humility should be everywhere: it would decrease HIV, increase first-world support, stop sexism.... Most people are wrong about most things; I feel they should be open to that possibility. I of course include myself.

Let me explain myself, in a roundabout manner.

In my time in Uganda, I have seen one thing which has affected me. It is everywhere I look. What do you think it is?

Sure, I see that sort of thing all the time. But they have never shocked me, appalled me, terrified me, or otherwise rubbed me the wrong way. Not directly, I mean. Those are just concepts: if I want to understand them, I can read about them in a book, I can listen to shows talking about them on the radio, or I can watch them on DVD. All the Fun Facts I put on my blog are not horrible, either. Except when you add one detail:

Personally, I will never encounter any item mentioned in the above list of evils: at least, not on a scale worth mentioning. But other people face these problems (and many, many others) every day.

And I'm sure I haven't conveyed my point yet, so let me put in one last-ditch effort:

And most people's lives are shit. Trust me on this one. Here, life is dirt cheap: most people are one small hop away from death, either instantaneous or prolonged. Hell, a large number of people are experiencing prolonged death. (I would whip out a Fun Fact or two here; but I promised no more, and I will keep my word.) Go ahead and learn whatever life lessons you want from my blog; except please do not take away from my blog anything along the lines of we should all have a simple life, no worries, no responsibilities: the Africans have it all figured out. That is not true at all. Their. Lives. Are. Shit.

So, why do they smile and laugh?

They smile and laugh because, well, what would you do if your life was shit?

I understand that different scenes strike different people in different ways. For me, smiles affect me the most. They are the bridge across an enormous rift--hahaha, no, let me rephrase: Smiles are the telescope which, on a clear enough day, lets me squint across an enormous rift with what it is to be a Ugandan on the other side, so that I can barely make out something by the horizon which just might be it. Because when somebody smiles at me, I naturally smile back; and for a fraction of a second, our differences melt away.

When I read about IDP camps, I see nothing but ink on a page; words cannot convey people. Ink can go into great detail about a million placid drones falling victim to a million tragedies. More powerful imagery may even zoom in on a single victim's story for added emotion. That effect is strong, certainly. But that same ink never seems to zoom in one that one person washing laundry or that one family eating dinner. It is easy to dissociate yourself from a story which will never happen to you; much harder is to dissociate yourself from a person who, when all is said and done, is doing exactly what you would do.

Unconvinced? Ask yourself: do the things you cannot change about your life define you as a person? Even a teeny bit?

Okay, then do the things other people cannot change about their lives define them?

Whatever you want to answer, the only sensible answer to that question is: yes, my opinion of other people is formed by what I know about their lives. The vast majority of available information on the matter has nothing at all to do with the people themselves. I can read all the statistics and books and articles and blogs I want, but my ignorance of the people will remain.

Clearly, one of the most crucial things I have learned is that there are some things I can never understand. If I were to throw my life away--get rid of my cell phone, burn my clothes, and go to live in an IDP camp--I still would not understand what it is like to live in an IDP camp. I am an outsider: I will always be ignorant of what it feels like to be born into this (or any other) lifestyle.

I, as a person, will never be defined by an IDP camp. And neither will anybody else.

I have, in the course of the past few months, tried my best to learn as much as I can about Uganda: specifically, about the people. I have talked about Uganda at every opportunity with anybody who seemed open to conversation.

Even so, we are talking about a very few Ugandans here. I have met (and conversed for at least a few hours) with Ugandans from at least nine different tribes: a fraction of the tribes in Uganda.

Of my spread of tribes, roughly half of these people were not in their home areas when I met them. They hardly represent their tribes' average citizens. Within their tribes, they represent a minority which lives away from home: a behaviour very different from that of the typical Ugandan.

I have only been able to converse with Ugandans who speak English. So my conversations have excluded a large subset of Ugandans: mostly the uneducated. (The uneducated are not stupid.)

Also, any conversations I have had which would give me a good idea of what life is like here would have to come from somebody who can relate to me. That makes for an age range of 18-30 or so. I encourage my more curious readers to have a look at a Ugandan population distribution graph. There, you can find a U with the bottom part somewhere between 18 and 30.

In other words, all of my conversations have been with minorities.

My point should be clear by now: almost all of the people of Uganda are probably quite unlike the Ugandans I interact with most. Seeing the smiles is as close as I will ever come to the vast majority.

Let me go out on a limb and say, I know jack squat about Uganda. And that will never change.

Actually, we should take a step back: how do you define the average Ugandan?

With all that ignorance, what gives the average Westerner the right to tell Ugandans what to do?

Hold on a second. Does the average Westerner even know about the effects of every action on Ugandans' lives?

I have always thought of myself as a considerate person. Yet three months ago, my answer to all these questions was, in all honesty, a resounding, No.

I have learned how ignorant I am. I may wonder about these questions, but I can never know their answers. I will always be ignorant. My time in Uganda has helped me come to terms with that.

But even worse: I believe I am less ignorant than most people. And they, through their actions, affect the lives of billions. And I have to come to terms with that.

Anybody who is confident in an opinion is, more often than not, ignorant of the surrounding issues. And so we come to Adam's Opinion Number Two: everybody is ignorant about most things, and no amount of effort can ever change that. 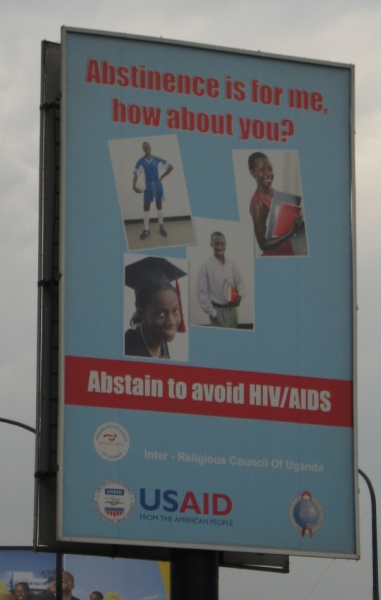 The current, depressing chapter in the book of AIDS.