I was arrested for being white while strolling around Goma during Congo's 50th anniversary of independence on June 30th.

I was told I made a mistake in leaving my passport at my guest house. I did that because I figured taking my passport to the pickpocket-stuffed streets would be an even bigger mistake. (It was the right decision: I even caught one pickpocket in the act.)

Of course, the reason was euphemism. The whole crowd, laughing at me, knew I was arrested purely because of my skin colour. Or maybe I was arrested because the policeman on that block was angry at me after his superior chastized him for trying to extract a bribe from me the day before.

"Wait," you say, "why would authorities be so intent on arresting a white guy who's allegedly done nothing wrong?" I'll get to that.

First, I'll back up and say this is the second time I've been arrested in Congo. The guy interrogating me this time had no stripes or medals on his uniform: I was not intimidated.

"Wait," you say, "If you think this guy is so harmless, why don't you name and shame him on your blog?" I'll get to that, too.

After helping hammer out a statement, I was allowed to fetch my passport as corroboration. My interrogator was disappointed to find absolutely nothing wrong with my documentation; I even had a receipt for my visa.

But he did pay particular attention to my $200 permit to climb Nyiragongo, an active volcano. 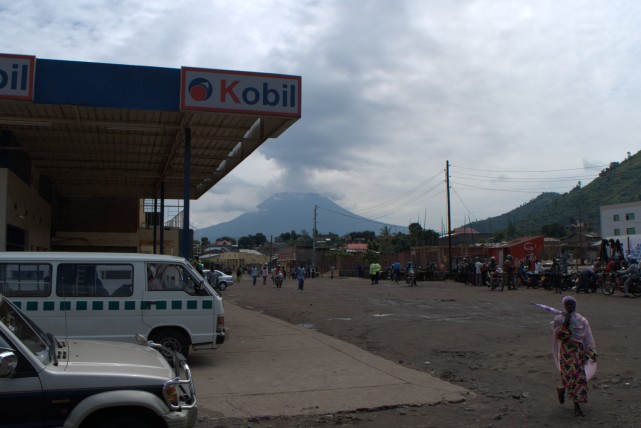 I had previously only seen Mount Nyiragongo at a distance, from the Rwandan city of Gisenyi.

He had me pegged. Or so he thought.

"Oh, this is going to be a serious problem," he foreshadowed.

He confiscated my camera and sent me to the waiting room as he worked on a statement of another white person who had been arrested in the meanwhile. The other white person, at least, had used his camera.

I watched the celebrations on a tiny television.

In this sort of situation, one must tap one's social network. I hadn't even been in Goma for 24 hours, but my social network was surprisingly well-connected. I sent out a couple of texts, and within minutes I heard one side of a phone conversation with my interrogator's superior, who was getting chastized by his boss.

He listened to the voice on the other end of the phone.

"Tell him he's a liar!" he yelled, then he hung up. His phone rang again but he didn't answer it.

"If this is the sort of thing they can say about me, maybe I should pack up my briefcase and walk out the door forever!" he said to one of his friends in the room.

I bit my tongue and buried my face in the book I was reading. I thought I had scored a major victory.

But as the hours drew on, I realized this kind of drama is like a bad soap opera: it happens every week and it's always the same way.

Finally, the other white tourist and I were brought, together, into the interrogation room. This time, the entire office came along as witnesses: clearly, there would be no talk of bribery here.

"My boss has decided to let you go without consequences," he said with a magnanymous smile. "But you should know that taking photographs is a serious offence. What if you were to take a picture of a government building?"

To verify that that wasn't the case, we both had to show our inventory of photographs to the group. The other tourist was first: he was asked to delete every picture he had taken that morning.

These are the pictures I showed them, which they admitted are legal: 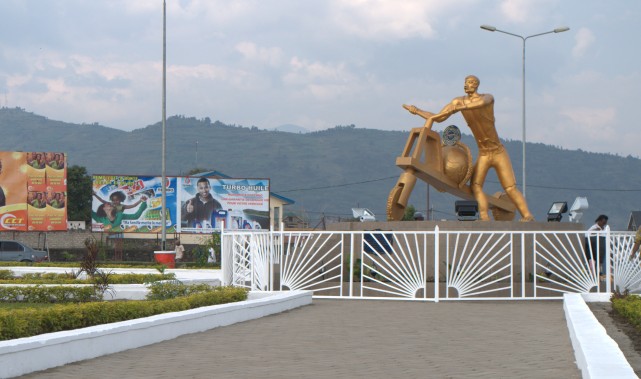 The engineer who finished this statue of a Congolese bycicle had asked me to take these pictures the day before, as I had to explain. 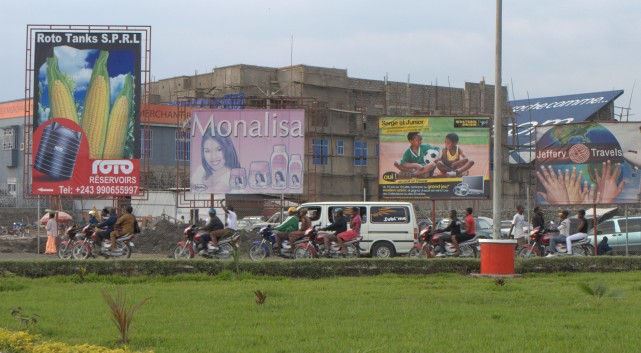 I took one shot which I would later crop to highlight motorcycle taxis in the roundabout rather than the Congolese bicycle; but this photograph escaped attention. 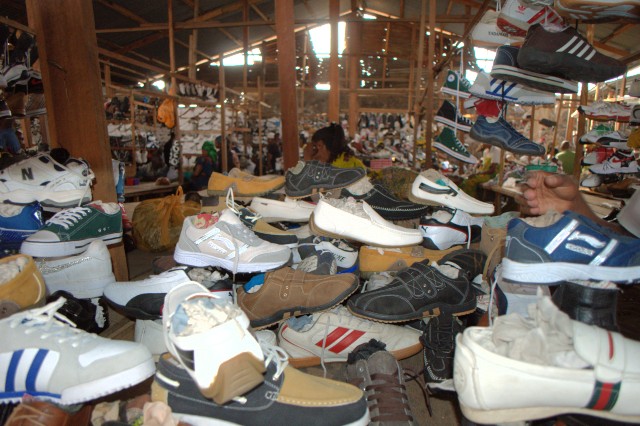 I had also gotten permission from the appropriate authority to photograph a shoe market. 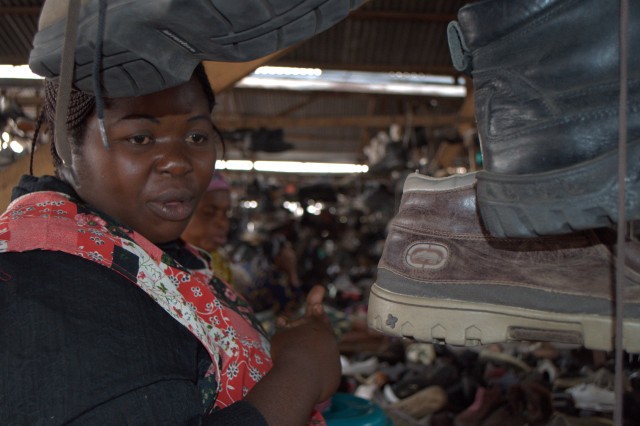 "Yes," I had to explain, "all these subjects gave me permission to take and share their pictures."

The man then explained that while he would do what his boss ordered and let us go without charges, he had to confiscate our cameras so we couldn't accidentally break the law in the future.

"I thought I was arrested for not carrying my passport," I reminded him. "I haven't taken any pictures without permission."

"Yes, but it's a good thing we stopped you when we did, otherwise you could have broken more laws in the future," he sympathized.

"You aren't even the police; you don't enforce the law!" I felt like saying; but instead I checked my chuckles and explained with all the humility I could muster that no, that $200 paid exactly for my right to take pictures of the volcano and that I would not leave without my camera. (What was he going to do: put me in prison against his boss's will?)

There were too many people around for him to press the issue, so he returned our cameras. We walked out, free at last.

But that's not the end, because the real story doesn't revolve around us. The real story is in those social networks: the mafia-esque government employees were using us to shake down our Congolese friends, who implicitly promised to make amends in the future.

I quietly made sure those friends got some extra money from me for their support. That's not really a bribe, see? I was thanking people for helping me out. Those people, in turn, thanked the government employees for their assistance in letting us go.

It's the white man's paradox: we're practically invincible. We can go home any time we want; the locals, on the other hand, have to live with the consequences of our actions. I didn't name names because while I don't hold respect for everybody in this story, I respect the fact that they can make my friends' lives less pleasant if I shame them.

Anyway. I kept to myself the rest of the day then climbed the volcano on Thursday with six other white people I met the same morning: 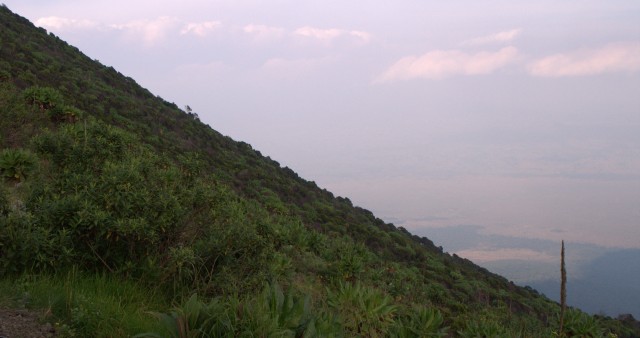 The climb up Nyiragongo is rather steep. 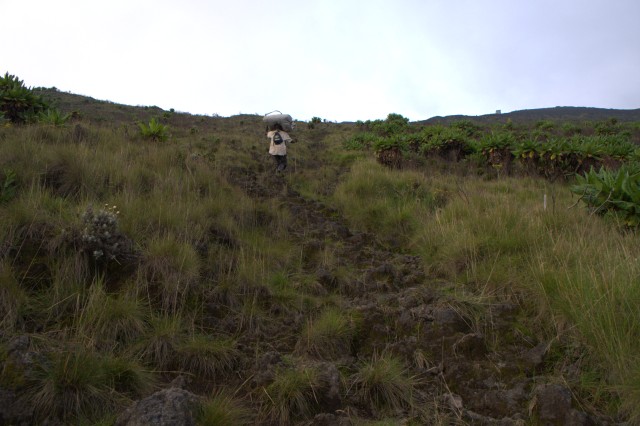 The path is made of volcanic rock, left behind from an eruption in 2002. The pebble-sized stones would roll out from under our shoes like marbles; I was amazed at our porters. 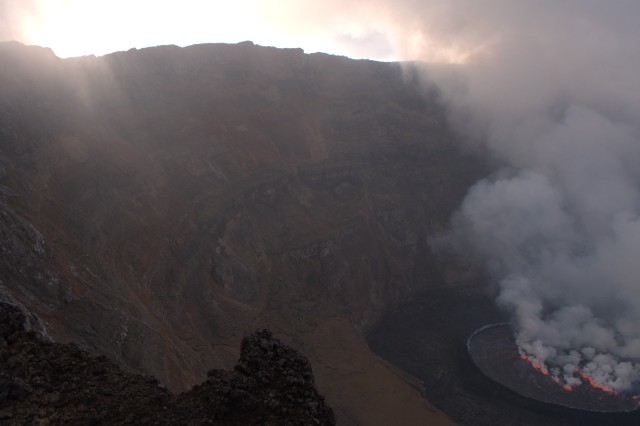 After five or so hours of hiking, the view at the summit took our breath away: a kilometres-wide crater with boiling lava in the middle. 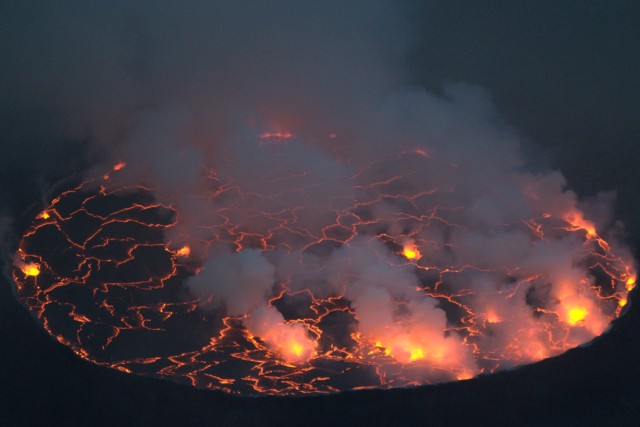 The lava constantly shifts and bubbles. 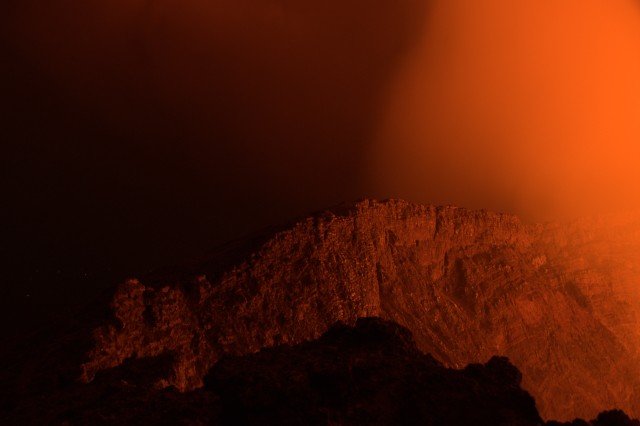 The glow of the volcano can be seen from Goma, several kilometres away. We could feel some heat, but we were too far from the lava to warm ourselves by it. 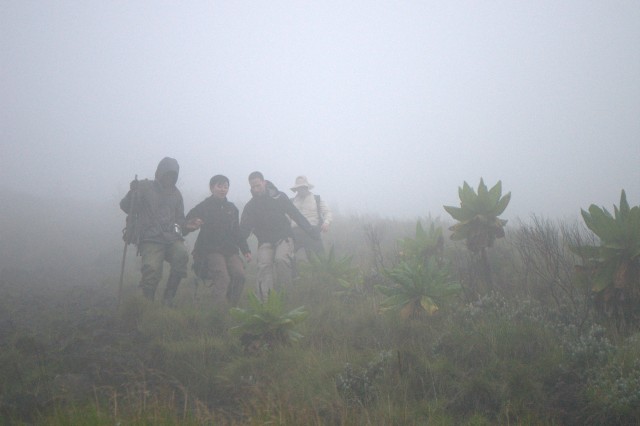 Really, at that altitude nothing could warm us enough. Only after descending several hundred tricky metres did we finally escape the fog, shed some layers and breathe properly.