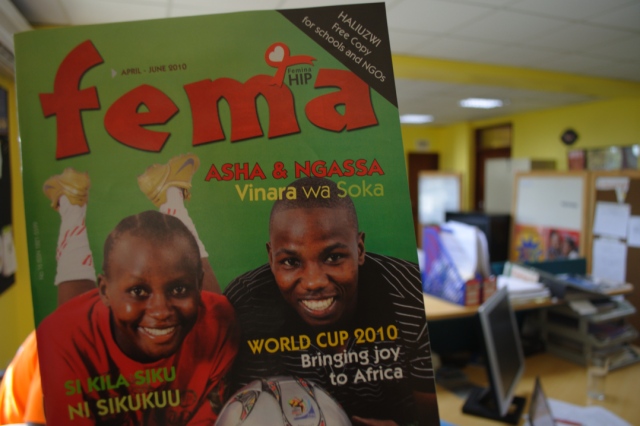 But distribution isn't as simple as a phone call to Canada Post.

For one thing, the timeline is different. Femina's distribution contractor promises that most magazines will get from the warehouse to the schools within 60 days.

Even the address list is a challenge: it's hard to figure out what schools are actually out there and where they are. There are no postal codes in Tanzania, and there are few official street names and even fewer numbers. For many schools, Femina only knows a misspelled school name and perhaps its district. Femina sends out a box with the school's name on it and hopes for the best.

In that district, receiving the box from its weeks-long trip over whichever roads have survived the rainy season, somebody from the distribution company has to exchange it for a confirmation stamp.

If the school exists, he may know where it is or he can ask around for it. But maybe his path is blocked by a flooded road. Maybe nobody has heard of the school. Maybe the headmaster is hundreds of kilometres away at a wedding or funeral and will only be back next week. Maybe the school has permanently closed. Then maybe the headmaster from some other school Femina never heard of intercepts our intrepid delivery person, confirmation stamp in hand, says his school isn't receiving copies, and asks if everything wouldn't be easier if he put that box down right over here instead of getting all wet and dirty and oh, hey, is that your delivery slip? Let me stamp that for you. And you can keep a nice, glossy copy for yourself.

Donors are skeptical when their recipients don't know what their money is doing, so Femina needs to know where its copies are going.

With my computer skills, I find ways to tell the computer what happened (not many existing programs include a "school closed all month because of bat monster" checkbox). Femina then uses the program I wrote to tell donors how well it's doing and tell the delivery company how to improve.

Femina sends far fewer magazines to nonexistent schools now than it did when I first arrived, three years ago.

The community team even gathered actual addresses for many schools, using a questionnaire. This could be the most complete and accurate database of schools and non-profit organizations in the country. Few organizations apart from Femina know, for instance, that the address of Buchambi Secondary School, in the Maswa district of Shinyanga, is "Maswa".

After all, there are still no postal codes in Tanzania, and there are few official street names and numbers.