On Wednesday all the Google interns were herded onto buses and led to San Francisco to watch a Giants baseball game. We were given free tickets and $20 worth of coupons to spend on beerwhatever we wanted.

Baseball is a sport in which players throw a tiny white ball around and whack at it with sticks and run around. But the majority of the game is spent waiting around. All in all, how fun can a baseball game be?

The coolest part: between the top and bottom of the fifth inning, the Jumbotron showed a message just for us interns. I managed to photograph it, among other things, in my Giants Baseball photo album. As requested by a couple of very fine people back home, I got a picture of myself with a hot dog and beer.

On Tuesday, there was a concert at Shoreline Ampitheatre (literally a 5-minute walk from work) with the Goo Goo Dolls and the Counting Crows. (I went only for the Crows, but honestly, who doesn't want to hear Iris played live, too?)

I had bought my ticket pretty much as soon as I got to California, at which point I didn't know anybody here, so I ended up sitting alone.

The opening band, Augustana, was quite good. I tried to buy their CD but I couldn't find the stall where they were selling it.

The Goo Goo Dolls were great. The Counting Crows were even better.

First of all, a warning: I fell behind my blogging, so I'm backdating the next seven or eight posts to the point when I should have blogged them, had I not been busy. Pretend I blogged them a week ago. And now, the first post:

Word of the day: escalation.

Sunday was the Gay Pride Parade in San Francisco. When I heard about this, I thought I absolutely had to watch it, since it's the biggest in the world (I think) and it's definitely a once-in-a-lifetime experience. Somehow over the course of the last week, somebody suggested that we'd get a far better experience if we were in it. That is, inside the parade, not on the side taking pictures. I am sure it was Vincent who suggested the skipping while inside the parade. Far from chickening out on such a unique opportunity (anybody is allowed to march for Google), I joined in the fun. Mike, Vincent, Mark and I donned our cool t-shirts, hopped on the Caltrain, and went to the parade.

The past couple of weeks I had been talking with coworkers about biking. A lot of googlers bike very often in the surrounding areas. I presented to them my constraints:

The consensus was that I should stock up on water and energy bars and just head for the hills. I shouldn't worry about energy (just head home if I get tired) or directions (just explore, don't forget how to get home) or lunch (eat energy bars). I was certainly happy to hear that, because my entire summer so had (and still has) consisted of reckless adventure and I wanted to continue the trend.

Saturday, after a couple of weeks of psyching myself up, I went. I went to the hills south of Mountain View and Palo Alto. Basically, I rode south along the road until it wouldn't go any farther, then I tried to get into mountains. Then I went west a bit and tried again. And again. And again.

In celebration of [insert excuse here], Google took all its Mountain View engineers to Santa Cruz for a fun-filled, fully free day at the beach. There are thousands of engineers.

The ride was uneventful. When we arrived, we were greeted by an arcade with about 50 video games, all free. But what's an arcade when there's a beach? But what's a beach when there's beer? A slew of interns grabbed free beer and free snacks, and used a free volleyball court to play free volleyball. Afterwards we got free food and then took our free passes to ride on the free amusement park rides.

We went home and rode on two free scooters, then we ate free food, and went home.

And I haven't gotten a free minute between then and now to blog about it.

Sunday was surfing day. A whole bunch of us went to Pacifica's beach (south of San Francisco) to catch the sweet waves. I took pictures of the event: they're in my Pacifica Surfing photo album. There are more photos available on Michele's PicasaWeb surfing album, which showcases one of Google's great new services, PicasaWeb.

Surfing, we discovered, is hard. We were given wetsuits (I looked so sexy in mine) and surfboards and we were turned loose on the ocean. Or rather, we went out and the ocean was turned loose on us. Those waves are huge and scary and white and frothy. At least I barely noticed the salt: when you're fighting a colossal beast of nature for your very survival, a taste in your mouth is the least of your worries.

A brief introduction to surfing: there are three main steps:

(Wow, this is the first blog post in which I actually mention anybody from California besides myself. But I figure I can't avoid it much longer.)

Saturday, Vincent and I drove to Sacramento and watched the AVP beach volleyball tournament. This was my first time watching professional volleyball. The tournament hosted both men's and women's games, and we timed it so that we could watch the men's final. Afterwards, we drove to the capitol to be tourists, then we drove home. I took pictures, and later compiled my photo album of Sacramento and AVP volleyball.

The drive took about two hours. I'll keep this entry shorter by sparing the details.

The volleyball games were very cool. We watched two Men's games (including the final) and most of two women's games. It was great fun to watch the games, and Vincent knew a lot of the finer details of volleyball so he proved a great guide. We got lots of free stuff, documented at the end of the photo album. Of note are the personalized autographs from the winners of the championship.

On Friday I looked out a window at work and saw a solar-powered car pulling into the parking lot. So I went to take a look. It was Stanford's solar car, which apparently is sponsored in part by Google. A few googlers (myself included) flocked to the car, and I ended up with a small solar-powered car photo album.

The car is very cool. It won a race from Texas to Calgary. One of its creators was telling me that on the last day of the race they had made an oversight and forgot to turn on half of the solar array, meaning they were missing half of their power intake. They lost the 11-minute lead they had developed and ended up racing neck-and-neck through Calgary, pulling some dodgy moves to cut off the second-place car or to avoid being left behind at a light.

There were some other funny tricks, too. Apparently every night before the sun went down they'd lean the solar array up against the sun to recharge the batteries as much as possible. Ditto for early morning. And if the ground was concrete, they'd spray it with water to make it more reflective. While driving, they'd aim to position the car alongside white eighteen-wheelers so that the truck would reflect light into the solar cells. (Drafting wasn't allowed according to contest rules, but this was.)

The car can hit a peak of 75mph, but its best speed is around 45mph-50mph: at that speed the solar array can recharge the batteries at the same rate as the motor discharges them.

At Google, there are many places where the cooks personalize our food to our exact specifications. Some people here don't think too much of it, but I am very touched when the cook looks me in the eye and smiles and gives me something delicious. Sometimes the lines are long: I think 15 minutes is about the longest a line can get. Here are some of the personalized foods I have eaten or need to eat:

I'm sure I've forgotten some; maybe I'll add to the Comments section as they spring to mind. 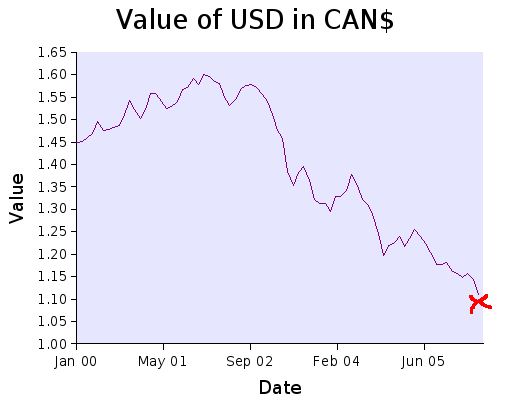 I went to Washinton Mutual on Monday to get a bank account, for a number of reasons:

After opening my account and depositing my pay, I went to a teller to do a wire transfer. I had all my wire transfer info ready... in my email. After half an hour of the tellers' hopeless attempts to figure out some numbers, I used one of their computers to log in and get the info. I transfered a huge chunk of money from US dollars to Canadian, at the exchange rate depicted in the following graph: