Shortly after I posted my original post about Steven's Creek Trail, I was informed of another path from NASA Ames to the Googleplex. It involves turning right directly after leaving NASA Ames, and then crossing The Stupidest Piece of Water Ever north of where the original path diverged from the trail.

The path is about 0.2 miles shorter than Steven's Creek Trail (3.05 miles instead of 3.25). Many people I've talked with prefer it because crossing the 101 is allegedly a bit of a chore. Personally, I find the dirt path in this trail more of a pain, but that's because my bike isn't made for dirt. It is nice that this new trail avoids traffic even more than the previous trail.

I have again described the trail as a photo album, and there are some goodies in there for people who like spying on NASA. So here it is: my photo gallery of the trail that is not Steven's Creek Trail.

One of my pictures shows the remnants of SGI. I'll explain a bit about SGI, because it's funny. In a mean sort of way.

I had a great weekend. By far the most exciting part was the rugby game (USA vs. Ireland A) Saturday afternoon in Santa Clara.

First problem was getting beer. In Montreal, one would simply go to a counter and buy a beer. In California, it's a bit more confusing. First I had to go get a red paper bracelet thing that says I'm over 21 years of age. Next I had to wait in another line and buy a beer ticket. Finally, I had to wait in line for my Guiness. Not only does three lines make three times the waiting, but it also left me kind of clueless as to where to tip. I gave a dollar in line number two, then I saw yet another tip jar when I picked up my Guiness. Maybe they were trying to trick me into tipping twice.

About the game: this was my first rugby game. I was amazed at how fast-paced it is. The pace is far more like soccer than American football: everybody is always moving, and play stoppage is rare. They even go on playing when somebody is injured.

By far the most fantastic thing in rugby is a situation which arises fairly often: somebody is in possession without a good pass to make, and a defender is about 5-10 yards away. I gather that offensively the only sensible thing to do is get as far up the field as possible before inevitably being brought down. In this situation, the offenseman will actually sprint straight into the defenseman, trying to knock him over. This must have happened at least fifteen times during the game, and nobody was injured because of it.

Somebody was looking through my photo album and brought my attention to a certain photo taken at NASA Ames. I'll zoom in: 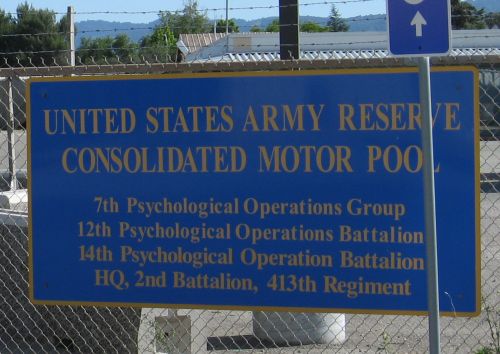 Yeah, battalions of psychological soldiers. They actuall do stuff, too. Their goal, according to this Wikipedia article, is to influence groups and individuals by toying with their emotions.

An example of psychological warfare: in Afghanistan enemy bodies were burned in public to try and lure the Taliban into direct confrontation. Also, soldiers read out messages calling the Taliban cowards.

I haven't been able to watch TV for ages, and hockey is hard to come by. In deseration, I have resorted to word-of-mouth. Some dialogue today:

Me: so, does anybody know the latest hockey news and scores?
[anonymous]: Hockey? They're on strike, aren't they?

There are two aspects of California which I could never possibly have comprehended until I'd been here for a while. Those are the free food and the perfect weather.

I took for granted in Montreal that weather is unpredictable and that food costs money. Free food opens up whole new worlds of decisions. In my mind are growing the beginnings of a new form of economics. It all stems from the opportunity cost of eating too much free food. (That is, eating more food now costs in appetite later.) This may sound funny, but it is a very real concern. The variety of food here is so great that a full stomach on the wrong night could prevent me from ever eating some rare and scrumptious dishes.

The weather is more subtle. Only after a few weeks can I really begin to notice it. My appreciation is amplified by complaints from everyone back home of horrible, hot and humid weather. Not to gloat, but over here you simply don't have to worry about what to wear. You can't make mistakes. You don't get caught in the rain.

I have started a new routine: every day I will take at least one picture which encapsulates the weather for that day. I've got two already; by the end of the summer I'll have around ninety. I'll put them all in a photo album, and then I'll stare at the album in a dejected trance when I get home and it's actually raining.

Posted May 31 in California

Most of my other posts are aimed squarely at the people in my life who are back home or abroad (they know who they are). This post keeps them in mind, but it's aimed equally at my fellow interns at NASA Ames. My apologies to either group if I say something which doesn't sound like it was aimed at you. (And my apologies to you, reader, if you're not a member of either group: you seem to have wasted several seconds of your life reading this first paragraph, and you'll never get those seconds back.)

Many interns at NASA Ames have been trying to determine the best way to bike to Google. The simple route is:

This is straightforward and quite quick. It's also for pansies.

Posted May 29 in California

I went out for a little bike ride today, and on the way back home I took pictures of some of the NASA Ames site. They're in my NASA Ames photo gallery.

A bit of background for those who I haven't told yet (who are wondering what on Earth I'm blogging about): at the North edge of Mountain View is a big NASA research centre called the NASA Ames Research Center. It has three entrances, but usually only the main entrance is open. They have a security guard who asks for my license (and sometimes my passport as well).

I live there because Google made some deal with NASA Ames. There are some lodges at NASA Ames for whatever reason (astronaut housing?) which are not being used. Google managed to reserve an entire building for its interns. The price is reasonably low, but I may be forced to accomodate a roommate before the summer is out. See my California Room photo album to get an idea of the living conditions. Towels and bedding and once-a-week cleaning are included in the price, and it's billed to the day; all things considered, it's far cheaper than renting an apartment.

Some of my pictures were taken from a large distance at full zoom, because frankly I'm afraid of the police and the security guards. Hopefully I've given some sense of the immensity of the biggest hangar. Unfortunately, my pictures of the two smaller hangars don't do them justice.

Thursday I went to San Francisco with some fellow googlers. The purpose of the trip: as an international exchange student, I am required to learn the skills needed to cope with American culture. So four of us carpooled over, walked in late (much to the annoyance of the conference coordinator), and learned some critical aspects of our new life in the United States:

This took us until 11:00, so I couldn't go to breakfast at Google (my third-favourite part of every work day). We went into what looked like San Francisco's Chinatown and had a meal at some cheap place. The people behind the cash seemed awfully confused that I did not in fact order or want to order the BBQ chicken. We ate and then went back to Google, where I ate a proper lunch (my second-favourite part of every work day).

So, my impressions? San Francisco is very hilly. A lot of streets are at a huge slant, and then intersections are always flat. A lot of the suburbs we saw while driving are composed of zillions of houses built on steep hills, so from the freeway one can only see houses, not any of the ground. That combined with some twisty bridge-y freeways made me feel like I was in a Dr. Seuss story. While I didn't like the traffic, I found this place quite fantastic!

I've set up a photo album section on my website. A picture speaks a thousand words, and so this blog entry and its associated photo album speak over five thousand. The album shows the room I'm living in for the summer. Here it is: My California Room. 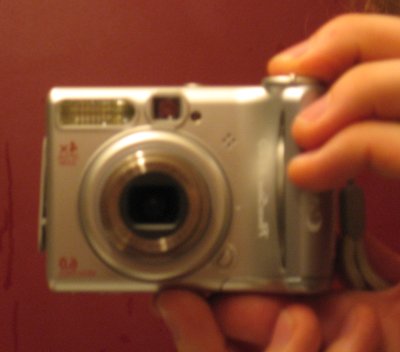 It's been ages since I last posted; to correct this, I'll try to post all the blog entries I didn't post in the same order in which I should have posted them.

So, first off: a couple of weeks ago I got myself a new camera (Canon A540) at Circuit City. The salesman was a real Californian surfer dude. Luckily I had researched a bit beforehand; when I asked him the difference between the A540 and the A530, he said, well, the A540 has more megapixels, which is like, better.... He gave the impression that he was agog at my throwing money around, which makes me wonder how long he's been working at a retail electronics store.

Best of all was during the checkout: a coworker of his was talking about a restaurant where she had been a few nights ago and she said it was really good. He asked, is it hella-good? The answer: no, not hella-good, just really good.

So, here is a picture of my camera. The camera isn't hella-good, it's just really good: