“Where are you going?”

“Are you sure you're headed in the right direction?”

I was a good 30 miles from the west coast and I was, after all, in the wrong country for crossing Canada. I guess I was training after all. 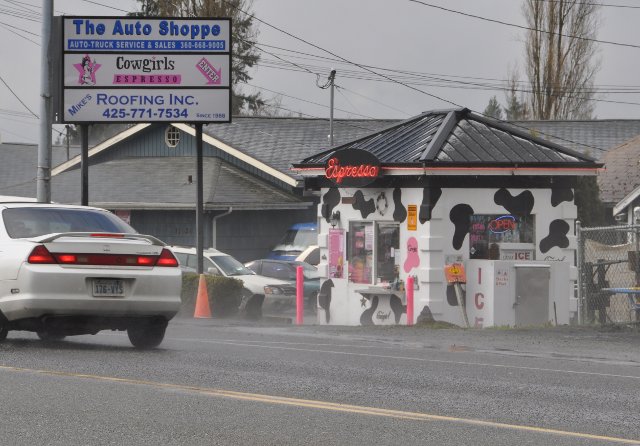 John (that's his name) is a building contractor who's “walking on the edge” of the state's late-blooming recession. He bought me a warm lunch and we complained about the hail outside. He gave me the region's oft-spoken excuse: “This is the west coast.”

So began my trial run. Half of me wanted to build muscles so I could tackle the Rockies. The other half was waiting for warm weather to hit the high-altitude passes, so the Rockies could be tackled in the first place. I biked up the west coast of Washington to Anacortes, then I took a ferry to Sidney, B.C. (just north of Victoria) and made a smallish loop on Vancouver Island. For the first few days of my journey I was headed in the wrong direction. 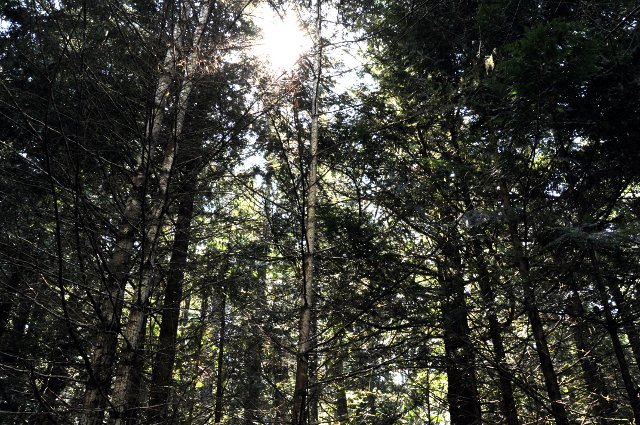 Crossing the border changes people's attitudes. I entered a Victoria bike store keen to brag, and before I could speak the person in line ahead of me told the clerk he'd crossed Canada a year ago. Washingtonians had been so impressed and curious about details; here, people would just ask what cause I'm biking for. In the United States I needed a reason; in Canada I needed a cause, as if a three-month cross-Canada adventure is yet another humdrum fundraising event.

(I do have a cause. I'm Canadian, after all. I'll mention fundraising in a future blog post.)

I learned and I learned.

I learned to use the wind and the vibrations in the road to sense the proper gear. I learned to find water and guerilla-camp. I learned that “this is the west coast” surfaces far too often. I learned how cold nights are and how warm my sleeping bag is. I learned that biking is as blessedly lonely as marathon-training. I learned about hills. 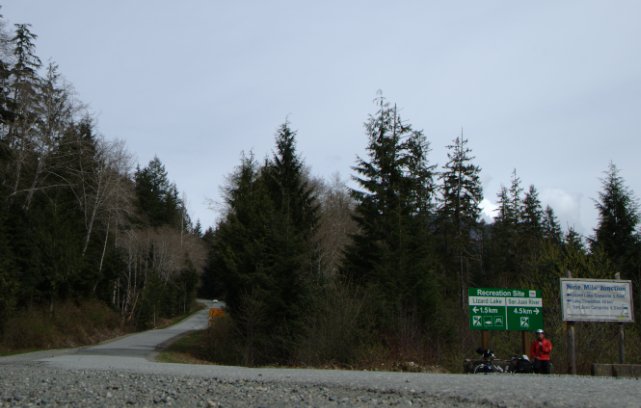 Nothing depresses in the same manner as the bottom of a hill.

Take this hill on the 80-or-so-kilometre logging road between Port Renfrew, on the coast, and Lake Cowichan, inland. A man I met in Port Renfrew told me there was only one big climb. He didn't tell me the climb would take three and a half hours, dodging loaded logging trucks and pick-ups. I began cheery, taking pictures; I ended soaked, lamenting the day I picked a path that brought me no closer to St. John's, Newfoundland.

A woman I met was thrilled she could tell all her friends she'd met someone who's biking across Canada. I learned the boundless energy of communication. 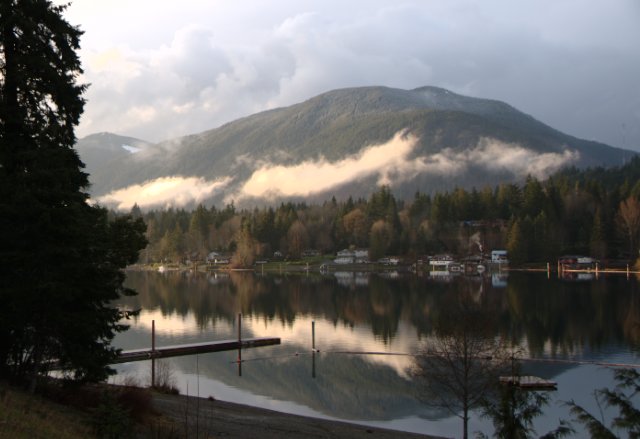 A campground is great when it has a view; it's even better off-season when there's no attendant so it's free.

Finally, I learned in 10 kilometres all I need to know about the TransCanada Highway. The name says it all: it's the benchmark I'll shadow for months, and it's chaos. Trucks clatter and cars honk at me as I cower in the shoulder with gravel and screws and screwdrivers and semicircular skewers. Each metal obstacle eulogizes another car or truck that broke down. The pavement is so flat it dispels kilometres per thought; the traffic is so fast I never want to grow accustomed to it. A little bicycle logo at every exit joins an arrow pointing across the exit lane on a sign reading, “cross here when safe.”

It never is. I will avoid this route whenever possible.

The highway brought me from Nanaimo, on Vancouver Island, to Vancouver, the lovely city on the mainland. I'd passed the tryouts: it was time for the real trip.