I have a bicycle chain.

I decided upon the Crow's Nest highway up to Allison Pass, altitude 1,342 metres. (Hope sits at about 50 metres above sea level.)

I was folding my map. A kind, near-bald man walked out of a restaurant, saw my map and asked, “where d'you wanna go?”

I told him I was headed to Princeton, along the number three.

He said I could travel the entire 130 kilometres that afternoon. I laughed and said there wasn't a chance.

He strained to think of hotels along the way, but I interrupted him. “I'm camping,” I said.

He looked at my bicycle, as if wondering whether a tent could fit in the panniers.

“You got more guts than the slaughterhouse!” he said, then he walked away. 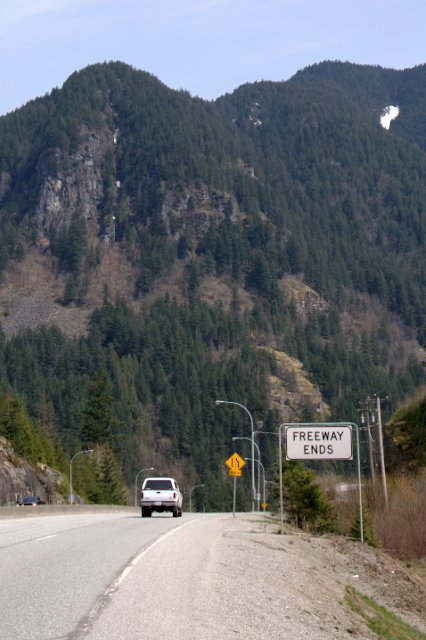 This is what the end of Hope looks like.

This led me to a 20-kilometre monster climb to less than half the altitude of the pass. It took hours, and I had another 40 or so kilometres ahead. That's why they say I'm beyond Hope.

The wind cooled and gnawed. Something nearby creaked; I look over my shoulder. It was a road sign hung from above, scraping rust as it swayed.

I approached a settlement. I needed water and I figured I'd find some here. A giant billboard announced “Sunshine Valley,” each letter wrapped in its own coloured circle, with a happy family beneath. The colours had faded and some paint had peeled completely, giving the entire village the air of a carnival attraction from a horror film.

I left the highway and entered town. There was an RV site and around 20 or 30 RVs had parked there. Nobody was outside, and the office was closed.

As the wind bit I decided the name “Sunshine Valley” stretches the truth. The tiny collection of dirt roads lies halfway up a mountain, so it's hardly a valley. If it were a valley, logic dictates it wouldn't receive much sunlight. As I thought this a ray of sun pierced the rainclouds and struck me, but I felt no warmth. If this is a sunshine valley, then a propane tank and hamburger in midwinter are a barbecue party.

I biked further into town, past new homes with no owners.

Children played in a playground, but they weren't making any noise. They didn't look at me. There were no parents.

Further up the Crow's Nest highway, all the campgrounds had closed for winter. I was too exhausted and it was too late for me to climb to the top, so I turned into what may have been a campground driveway, hid my bike, marched my packs through waist-deep snow and set up camp. 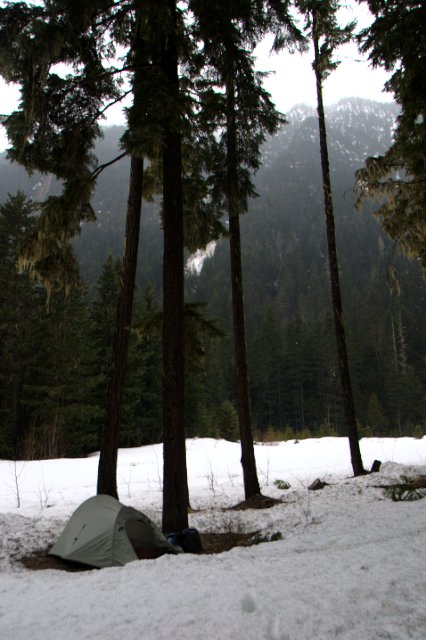 I pitched my tent where a tree had warmed the ground enough to melt the snow. My path in was over a metre deep but if I shifted my weight carefully I could creep along the snow's crust without falling through.

I wasn't cold, despite the snow. I slept soundly, despite my lack of bear spray.

I guess I got guts.