The Y in MOMERY hides in a crevice. The author, desperate that Picky not be fergot, sprayed another PICKY a few metres ahead.

I never knew Picky, but as I bicycled around the Great Lakes I could imagine the death: a quick thud, after which the driver fled a nagging guilt. An hour later, 100 kilometres separated culprit from corpse.

A car zooms past a dead racoon.

Animals aren't the only victims of road accidents. Crosses behind guard rails give testimonies of human tragedies.

I saw a man standing by the side of the highway. He dashed into his car and zipped away before I could approach. He left behind a wreath.

I survived the Canadian Shield, and I'm leaving the Trans-Canada Highway for a while. My life has flashed before my eyes so many times I began fast-forwarding the boring bits. 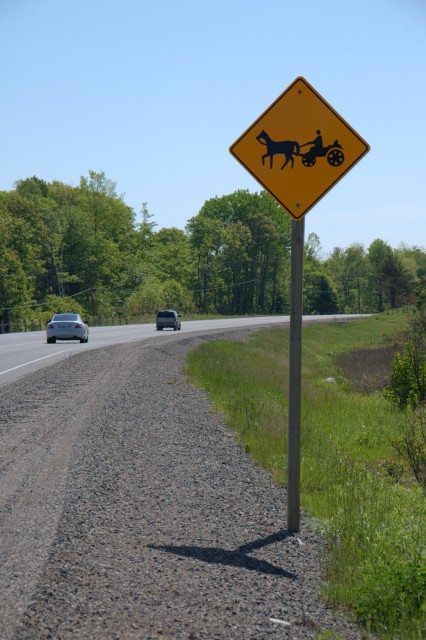 Horses are equipped to travel on the soft shoulders of the Trans-Canada Highway, but cyclists must join the cars.

Many drivers are allergic to lane changes and they come within centimetres of clipping my bicycle, even though they have ample space to circumvent me. RVs and pick-up trucks lugging fishing boats make me wince, as they often steer into my path too early. I think they don't realize how big their vehicles are.

A half-dozen oncoming motorists have even passed cars in front of them using the lane I'm bicycling in, scraping past me head-on at 120 kilometres per hour. I wish I could explain to them that I'm not aware they're coming until it's too late because I don't expect to be hit by oncoming traffic. If they killed me, I imagine yelling, they'd face life in prison for criminal negligence causing death. There would be ready witnesses in the cars they passed.

But they're long gone before the rush of adrenaline releases me.

More than 200,000 Canadians are injured in motor vehicle accidents in an average year, according to Transport Canada. That's around six out of every 1,000 people being hurt every year. Thousands die every year. Car accidents account for almost one per cent of deaths in Canada.

As I survive hour to hour, I reason that my own near-scrapes aren't anybody's fault. They're everybody's fault.

It's clear to me now: human beings are bad at driving. Our reflexes are too slow, our real-time risk analysis is too optimistic and we'll never see all the bumps and hiccups and obstacles on the road. We don't plan what we'll do if we see a pannier-laden cyclist in our lane, and we forge ahead anyway. Several truck drivers have coloured outside the white line in the shoulder after passing me, stirring up dust. If they can't control the edges of their vehicles, how can the rest of us, who have far less experience?

Road signs are phrased to convince you that you're a safe driver but everything aside from you is dangerous. School buses and cement trucks might slam into you from side streets. Deer and moose might charge you. Slippery roads will make your car fishtail.

Those are lies. In truth, you are dangerous. Take responsibility: you're driving a deathtrap too quickly to control it.

Please, for everybody's sake, avoid driving when you can. When you can't, be careful. 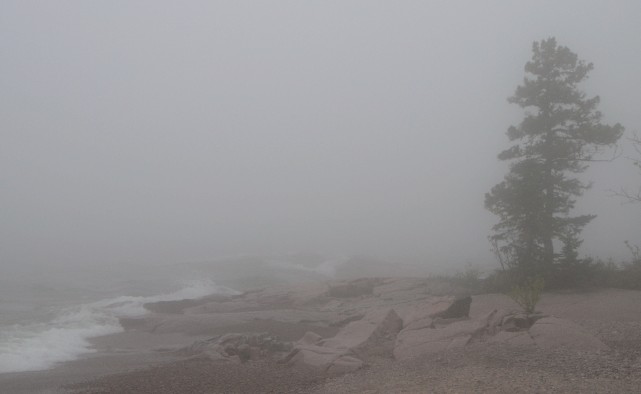 Lake Superior's fog can roll onto the road in bad weather, making me invisible. 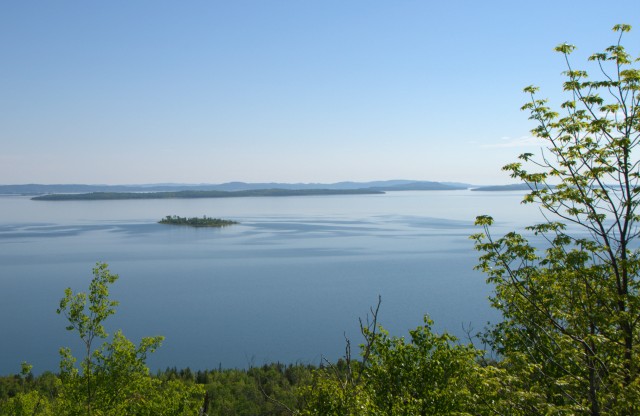 Much of northern Ontario is gorgeous. A viewpoint on Manitoulin Island overlooks the Georgian Bay in Lake Huron.