I think it was a question, as in, “do you understand the ramifications of what you're asking?”

I do. A cappuccino is more than a splendid beverage. I use fair-trade cappuccino to experience each city I visit.

“Fair trade” means growers are paid a decent wage for their labour, as verified by an independent referee and advertised by a logo. Fair trade makes a world of difference to faraway families, and it sometimes costs a few extra pennies per cup of coffee in Canada. The trade-off appeals to many coffee connoisseurs, so shops that sell it are usually classy.

For instance, the Modern Bakery was so crowded some customers ate outside in near-freezing weather. Clearly, Revelstoke residents appreciate great food and coffee.

In each city, the vibe is different. 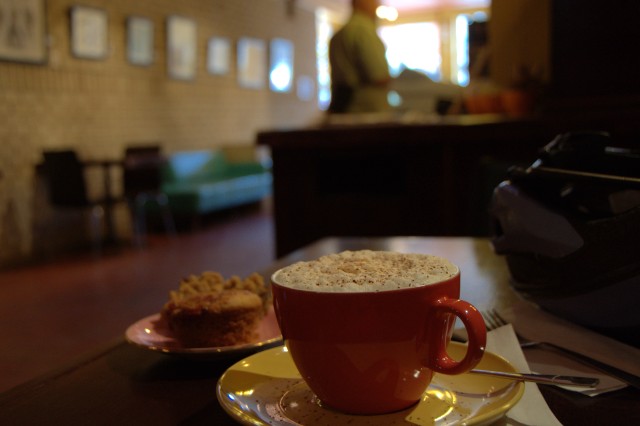 The bubbles are too big on this cappuccino from the Calico coffee shop in Thunder Bay. Big bubbles burst and leave pock-marks. It tasted superb, despite this flaw, and the atmosphere was friendly and homey.

Ottawa inspired this ritual. Its Bridgehead coffee chain is all over town and its cappuccinos are always the same—just like our politics. That's a good quality in a Bridgehead cappuccino.

The non-profit Coffee House in Calgary, Canada's oil city, is the opposite. As I waited for the cappuccino machine to repair itself in the trendy Kensington district, a man in a pressed shirt walked in, absorbed the vibe and fled. Perhaps he disliked the server's blue hair and small bowler hat, or maybe he feared the man wearing dreadlocks, a bandana and a spikey leather jacket who was buddy-buddy with all the customers. Maybe he couldn't stand the girl sitting with her friends in a corner who couldn't play her electric guitar—not that it was plugged in. Most customers weren't drinking coffee, but I don't think coffee was the point. Some people need an antidote to Calgary's corporate hamster cage. (Skyscrapers in downtown Calgary are connected by tunnels above street level.)

Winnipeg can't brew cappuccinos. Mondragon, the “political bookstore and vegan restaurant,” dropped a thin film of foam onto a watery brew. I visited Fyxx next door in desperation. The non-fair-trade cappuccino was equally disappointing.

The barista actually stirred my cappuccino in the River Cafe in Owen Sound, a tourism hub on Lake Huron. Ick.

I was more impressed by Cafe Natura in Sault Ste. Marie, near the historic canal that bridges Lake Superior to Lake Huron and the bridge that links Canada to the United States. The waiter told me they don't serve cappuccino, then he cooked me pancakes.

And the good cappuccinos? I've drunk plenty. The best was in Banff.

The Wild Flour Bakery is a half-block removed from the tourist lane and its cappuccino was spot-on. Two other customers my age were reading their afternoons away. Babylon by David Gray played over the speakers at the perfect volume, neither too loud to hear nor too soft to hum along. I looked out the wall of windows to the sunny weather and thought to myself, I could stop biking and just live here.

Banff is surrounded by hiking and biking and camping and skiing adventures. Heck, it's in a national park. Artists from across the country flock there to create magic at the Banff Centre, and the coffee shop is perfect. As a reformed ski bum told me back home, it's Neverland.

Neverland. You never grow old, you never get bored and you never regret anything. You laugh when people ask what you plan to accomplish in life. You die a child, innocent and blissful.

Too soon, the song ended. I shook myself back to the present.

That was a good cappuccino.