Suddenly, music emerges from an invisible portion of the river bank. It's Rebecca Black's “Friday.”

It's Friday, Friday, gotta get down on Friday....

There's plenty of time to think on a bicycle, but it's not useful thinking. I start a typical morning with plans to ponder my future, but soon my mind follows the circles made by my feet.

It begins to rain, so I disagree.

It's sunny and I've reached Moncton, New Brunswick, my last stop before the Atlantic. I eat a vegan wrap and drink a smoothie and a fair-trade cappuccino on a healthy-restaurant patio. Two waitresses are taking turns serving me. They speak French with English accents and English with French accents and I decide I like this part of Canada. This is Acadia, a region which formerly belonged to France.

They bring me inside to consult their cyclist coworker for campground suggestions. He's a native French-speaker, I think, because the waitresses switch to French when they speak with him. His French sounds more English than his English does. He says the coastal campgrounds near Moncton are expensive and uninspiring.

“I was thinking of going to Murray Beach,” I say in English-sounding French, and I point at my map. Murray Beach is a provincial park.

Their eyes pop. All three swoon. It's decided.

Murray Beach is sunny. There are many campers and no trees. Hundreds of us are camping on the grassy slope beside the ocean. An aging cyclist from the RV next door befriends me and we compare bicycles and stories. He surely has more of both, but he prefers listening.

It's neither sunny nor raining. I'm on Prince Edward Island and the state of the sky is crucial. The royals are visiting. Local news stations talk about how the weather might affect Will and Kate, over and over and over again.

It's drizzling and the royal pair is shaking hands a few easy kilometres away from me. I stay put. I'm the only person in the province who isn't excited.

A familiar-looking house sits beside the ocean on the northern side of Prince Edward Island.

It's sunny for three days and a breeze is behind me the entire time. This is Nova Scotia, and the fortuitous weather convinces me to detour for three days along the Cabot Trail, a winding road with the toughest hills and grandest scenery since the Rockies.

I climb for hours and careen for minutes, day in, day out. I meet cyclists, enjoy their company and eventually pass them. I watch silhouettes of hikers walk the mountaintops. I stop to chat with tourists and locals at lookout points and gas stations. 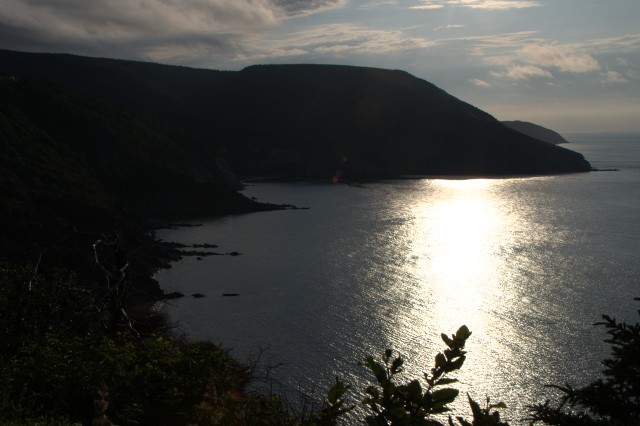 Coves line the roads all over Cape Breton, Nova Scotia.

The sun is gentle and the ocean is relaxing. I sleep at the best campground in Canada. It's in a village called Meat Cove. The dirt road is long and steep and loose. I skid when I brake and my wheel spins when I stand up to pedal. 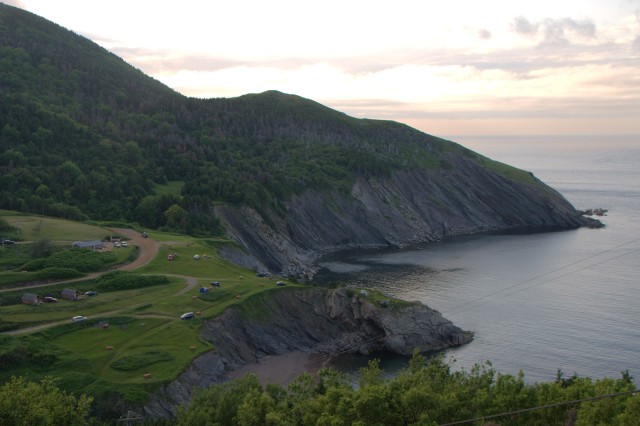 Meat Cove has the best campground in canada. Yes, that's a tent on the part of the campground that juts out into the ocean.

The air is cold when I arrive near sunset and it's colder when I leave near sunrise. Cold is good for hard exercise.

It's the rainiest day yet. I'm in Newfoundland. The province is known as The Rock and I believe its people must be rocky, too, or the constant weather would whittle them to naught. 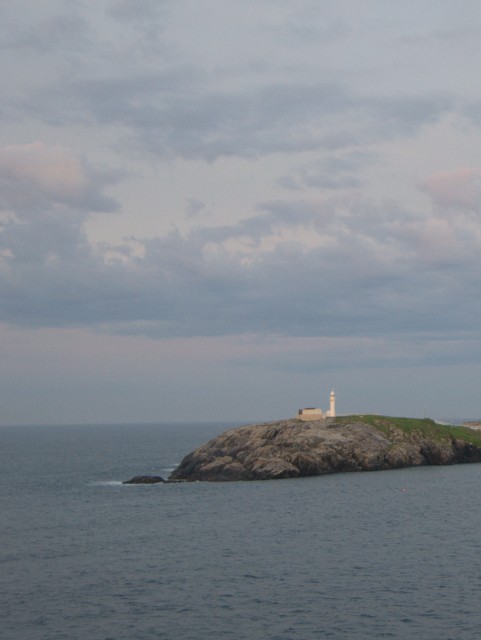 A lighthouse greets visitors who ride the ferry to Channel-Port aux Basques, on the western side of Newfoundland.

The sun has abandoned me and I'm cold. A beastly wind hammers at my helmet and daggers of rain swoop up under my visor.

I find a diner and order a hearty late breakfast, plus a plate of pancakes with “syrup.” I'm always skeptical of “syrup,” but today's syrup is in fact maple syrup, which is the only syrup, really, so I'm relieved.

Another cyclist walks in. I met him last night in the campground. He'd been talking on the phone with his wife on the only patch of ground where he could find signal. He was soaked then, too, because it was pouring then, too. He's a native Newfoundlander who lives in Ontario and cycled halfway across the country. He crashed thrice during his trip. He showed me the bruises.

He's sopping wet and shivering, as I was 15 minutes ago. He sits with me and orders the same breakfast I'm eating, minus the pancakes. The waitress asks if we're father and son. She eyes me and blushes and fills my water bottles and shows me where the bathroom is. I leave forever to battle the elemental rock as my could-be-father stays and chats with her about things only Newfoundlanders would understand.

One day is gray but almost dry. “Yer crazy,” says a stringy construction worker holding a stop sign. His accent sounds rural-American. He swears often, and each curse thuds.

The next day is gray and dry again. “Oh my sweet, lovin' Lord,” says a waitress after I eat my pancakes and tell her how far I've come. 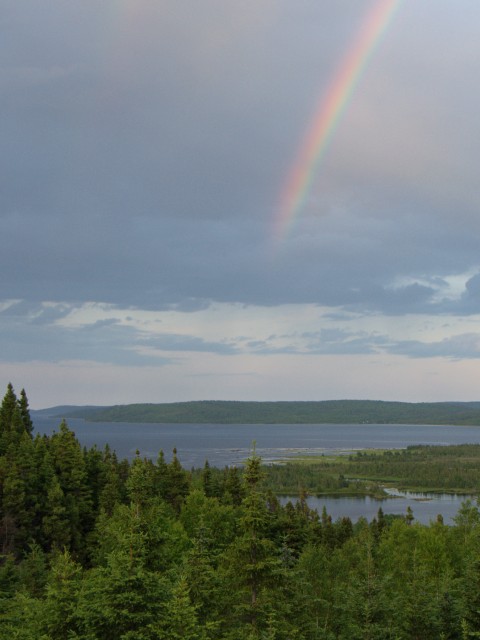 The Trans-Canada Highway misses most of the ocean along Newfoundland, but it passes countless lakes.

It's so rainy I only see horizontal streaks of wet. The wind rocks me from side to side. It's my grand finale—my last day.

Gusts ambush me. I veer a metre to the left or right each time to compensate. I can't avoid being swept into traffic.

I laugh and cackle and yawp and the rain tries to muffle me and it can't. I am equal to the wind, the rain, the Rock. When they roar, I roar back and pedal harder. I'm like them—pure intensity.

You have to be mad to ride a bicycle in weather like this.

I'm in a diner. Customers shiver as they enter and wince as they leave. I pee my final pee in a crowded men's room. I'm in the stall, and a man at the urinal is talking to a man at the sink in a Newfoundland accent that sounds Irish.

“Glad to see the weather's back to normal, eh?”

“I said, glad to see the weather's back to normal.”